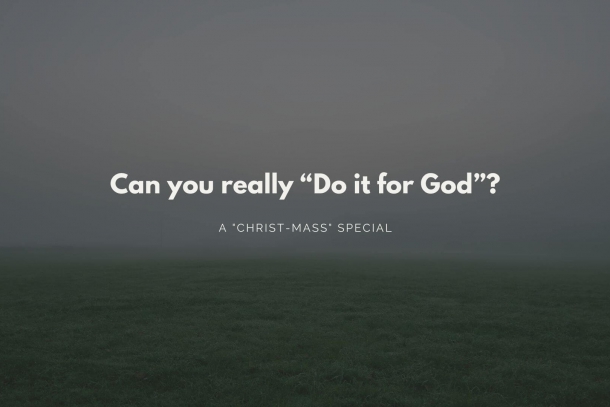 The Nigerian gospel, a proponent of this narrative that you can somehow do things for HIM, that HE needs your help to establish HIS kingdom. That’s why we hear statements like “Your giving is for God” (though we all know it’s the “preacher” that will end up spending it) or your “service” is for God they say (where service is code-word for unnecessary abuse). Sometimes is material, where you hear something like “your contributions toward the building of this cathedral is for God, not us, for God.” I mean, it’s “God’s house” afterall. Another lie.

Here’s what the scriptures say by the way:

‘Thus says the Lord : “Heaven is My throne, And earth is My footstool. Where is the house that you will build Me? And where is the place of My rest?’

HE created the universe with the earth being HIS footstool. Can you really build a house bigger than that?

There is a lot of chaos in the world today due to this idea than we are doing things “for God”. Wicked religious wars have ensued because of this notion, with man rebranding it as “holy wars”. Nonsense! True Christians have been persecuted throughout the ages physically, spiritually and even psychologically by the “Christian superstars” in the name of “We need to help God defend HIS truth”. The Truth however is they’d rather defend traditions of men than speak and live out The Truth.

I was told it was “Jesus’ birthday”, I mean what is wrong with that right? More crap!

Christmas is a repackaged pagan holiday by Constantine in AD 312, who worshiped something called Mithra and the Juvenalia (whatever that means). They adopted it into “Christianity” and called it “Christ-mass”. It’s not even a conspiracy and I think that bothers me more. Almost every theology school teaches this but for some reason, no one told me when we were at “bible study”. Why this information was not considered important is beyond me. It would have been nice to have been given a choice. However, I should also have checked for myself so I guess it’s a case of bad teacher, bad student.

Anyways, “Christmas” was not started by Christ and as such, HE is not in it. HE would not join us because it’s been done for thousands of years. God does not change. He simply is the same yesterday, today and forever. It is you, man, that changes. So do your parties, your festivities and go bankrupt (which I strongly advise against), but do not say it is for God. He actually hates pagan festivals. Here’s what the scriptures testify:

HE decides how we worship. HE gives instruction and those who are called to worship HIM are to obey. It’s always been like that with the saints.

You might argue saying, “what about Moses, Abraham, Isaiah, and all the saints before us”. They were not trying to impress God. They were simply normal guys God called out and separated to use for HIS glory. So they lived in total and complete obedience to Christ. Moses did not try to “do it for God,he simply obeyed when the call came”. Abraham also obeyed when the instruction came. He didn’t kill his son then say Lord, here’s my sacrifice, No. He heard the instruction, then offered the sacrifice. That’s what we call living by faith. By Faith, Abraham obeyed to go to a land without knowing where he was going. No GPS, no map, no timeline, nothing. He simply obeyed.

True worship is to seek God for what He wants and not for what we want.

The Worship of God by Victor Hafichuk

Abraham didn’t choose to “do it for God” when he offered his son as a sacrifice, he simply obeyed a command. Moses didn’t try to “do it for God” when he went to Egypt, he went in obedience to Jesus’ command. Noah, Abel, Sarah, Isaac, Jacob, Joseph, Daniel and so many more, they all lived by faith. The lived to serve and obey God no matter the cost.

The breaking news is you cannot help God your way, in your understanding. He does not need your idea of help. Your help is probably worth the same as stones, maybe even less because stones at least obey God, they do their jobs pretty well. Salvation is HIS work. You can’t impress HIM with your idea of “working for God”.

The Lord did not ask you to join the choir or become choir master. He simply said “do not commit adultery”. However, you think you know better. You sleep with all the sisters in church and then say Lord, accept my sweet sweet voice. It doesn’t work like that. Your righteousness is like filthy rags before HIM. When you sing, you actually risk offending Him because you know the truth, yet you reject it, not in your words but in your actions.

Saul’s sacrifice was offensive because HE did not obey The Word of The Lord. He believed he knew better. He was convinced that by offering the good looking animals, surely God will be more than impressed. He lost his kingdom because of this. Shocking as he even tried to apologize but there simply was no hope. The decision was made.

The same goes with Nigeria in general and the Nigerian gospel. The instruction is simple: Thou shalt not steal. But what do Nigerians do, we are recognized as one of the most corrupt! We steal from our brothers, government officials steal from the nation and then we use stolen money to build a huge cathedral and anoint the thieves as ministers of the gospel. Woe to those call good evil and evil good.

It is wicked to do such a thing. It’s better to stay in the world than to be an active thief in Christ. Thieves worship money, not Christ and guess what, that’s idolatry. Here’s what the scriptures say of Israel in the wilderness:

‘I don’t want you to forget, dear brothers and sisters, about our ancestors in the wilderness long ago. All of them were guided by a cloud that moved ahead of them, and all of them walked through the sea on dry ground. In the cloud and in the sea, all of them were baptized as followers of Moses. All of them ate the same spiritual food, and all of them drank the same spiritual water. For they drank from the spiritual rock that traveled with them, and that rock was Christ. Yet God was not pleased with most of them, and their bodies were scattered in the wilderness. These things happened as a warning to us, so that we would not crave evil things as they did, or worship idols as some of them did. As the Scriptures say, “The people celebrated with feasting and drinking, and they indulged in pagan revelry.” And we must not engage in sexual immorality as some of them did, causing 23,000 of them to die in one day. Nor should we put Christ to the test, as some of them did and then died from snakebites. ‘

You cannot please God without faith. You can’t impress Him without Faith. Faith is a gift, one only HE can give. Worship HIM right, with reverence and fear or don’t bother. A worship that we create for HIM are as filthy as filthy rags.